You are here:  Home / Save BH / Public Engagement & Value

New Burlington House was purpose-built for the Society of Antiquaries and the other Courtyard Societies in the 1870s “to conduct their valuable pursuits in contiguous apartments…for the advantage of the country.” (Then Prime Minister, Lord Palmerston, Hansard, 19 June 1857). The Society has been delivering benefit for the country ever since.

The Society has been developing an extensive public engagement programme since 2007, when it held a major exhibition at the Royal Academy to celebrate its tercentenary.

Over the last six years, the Society has focused its activities at Burlington House on introducing the public to its museum and library collections and the expertise of its Fellowship. It has done this through public lectures, exhibitions, open days showcasing the results of our research grants programme, and post-graduate and young researcher open days and conferences.  Since 1962, the Society has owned Kelmscott Manor (Oxon), former home of William Morris, the 19th century designer, artist, poet, political thinker and Fellow of the Society. The Manor is open to the public, but it is presently in the midst of a multi-million pound programme of repair and rejuvenation.

Table 2 provides some key statistics of our public engagement, grants, and publications programmes at Burlington House and Kelmscott Manor. 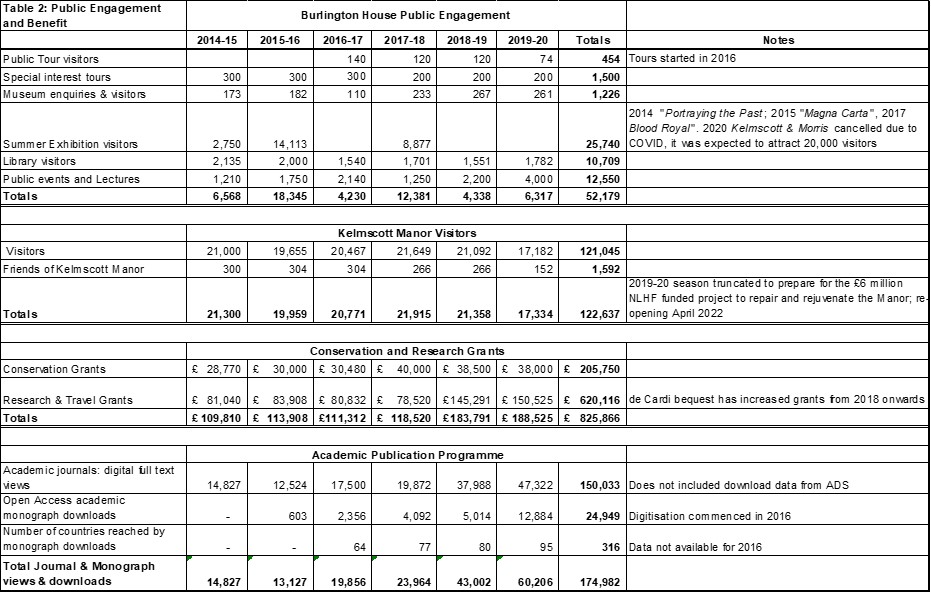 In summary, the Society is a determinedly outward-facing charity, and over the last six years:

Public outreach at Burlington House has been developed despite the restrictions imposed by the lease and rent issue which has been ongoing since 2012. Specifically:

In contrast, the Society’s historic estate at Kelmscott Manor is entirely owned by the Society. At the Manor, visitor numbers have steadily increased until 2019, when a major campaign or repair, reinterpretation and rejuvenation commenced. The Society has raised over £6 million to fund the project from the National Lottery Heritage Fund, other funding bodies and individuals. The property will reopen in 2022, and we expect visitor numbers to double after five years. The Society has been able to do this because it owns the property, and the investment demonstrates the determination of the Society to deliver public benefit.