You are here:  Home / Staffordshire Hoard Book of the Year Nomination

We are delighted to inform you that The Staffordshire Hoard: An Anglo Saxon Treasure has been nominated for Book of the Year 2021 in the Current Archaeology Awards

The Staffordshire Hoard: An Anglo-Saxon Treasure tells the story of the Hoard’s discovery, its acquisition for the nation, and the six-year research project that pieced its fragments back together, identified its objects and explored their manufacture. Written by a team of specialists in Anglo-Saxon archaeology and history, and expert conservators with unparalleled access to the Hoard, the text is beautifully illustrated throughout with full-colour photographs, maps and explanatory drawings. Key chapters discuss the decoration and meaning of the Hoard’s intricate ornament, the techniques of Anglo-Saxon craftsmen, the religious and historical background, and hoarding practice in Britain and Europe, to place this most exceptional find in context. Finally, the text explores the impact that the find has had locally, nationally and internationally in the twenty-first century.

The Society is delighted to be the publisher for this monograph and would like to convey our thanks to Historic England for their generous support.

Congratulations to the other nominees for this award, many of whom are also Fellows of the Society.

For further details and to vote click here. Voting closes on 8 February. 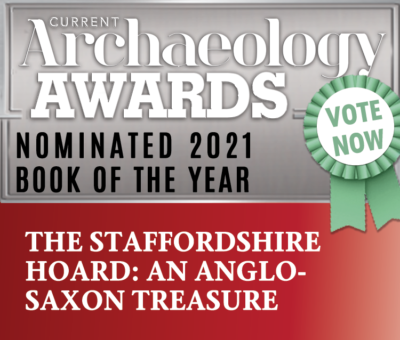 We launched this monograph in September 2019 and below are some images from this event.