The Burning of Westminster Palace in 1834

This broadside reflects the importance of the work taken by the Society to record features of buildings that subsequently succumb to ruin. This includes the Palace of Westminster and its notable wall paintings. In the nineteenth century the building hosted the Houses of Parliament and various law courts. In order to accommodate a new Court of Bankruptcy, it was decided that a space hosting an abundant amount of wood would be emptied, and the material inside burned. The furnaces of the House of Lords, however, overheated and started the worst fire since 1666. St Stephen’s Chapel, the Painted Chamber, and the House of Lords all succumbed to flames and it was decided that a total dismantling and re-build was necessary. Today the Society owns key records of the exterior and interior of the perished building. 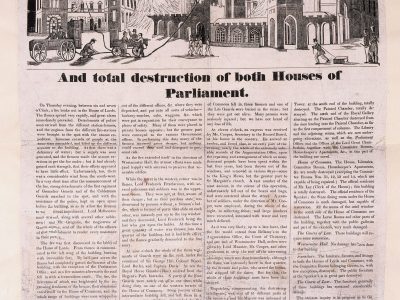