Petition to King James I for a Royal Academy

This petition preludes the formation of the Society but indicates that a scheme for an academy of scholars acting in a similar way to the Society was a longstanding idea. Edmund Bolton, a Catholic lawyer, spent several years promoting the idea of recognising and collectively representing those who keep a detailed record of contemporary events in England, particularly through recording the antiquity of the nation. In 1617 he addressed a petition to the Duke of Buckingham to realise his scheme, and two more to James I in 1619 and 1620. A charter was promised but never completed, likely to have been overshadowed and forgotten because of the King’s death in 1625. Thankfully the efforts of the founders of the Society in the early eighteenth century saw Bolton’s idea come into fruition. 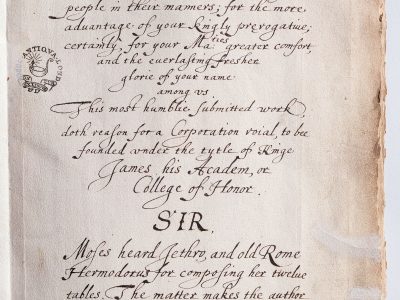