The Painted Chamber in the Palace at Westminster was regarded as one of the marvels of medieval Europe because of its magnificent decoration. Historians have debated whether this work was carried out between 1263 and 1272 under the patronage of Henry III or later between 1292 and 1297 under Edward I. When wall paintings were uncovered during refurbishment in 1819, the Society’s Secretary, Henry Ellis, asked Charles Stothard to record them, and his drawings were exhibited at a meeting in 1820. In 1842, Henry Shaw, the best-known illuminator of the period, was commissioned to hand-colour several of the engravings of the drawings (made by James Basire). These were issued in the Society’s series Vetusta Monumenta. The wall paintings, which would have been about three meters high by one metre wide, included depictions of Virtues overcoming their opposite Vices, as well as a series of Old Testament narratives. The Society holds both the original drawings and the published plates. 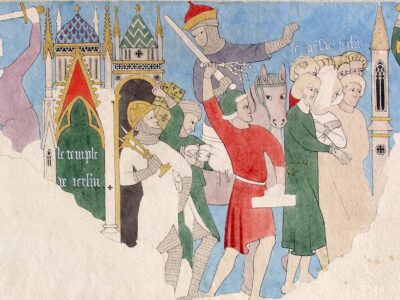 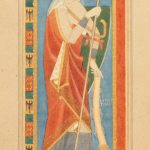 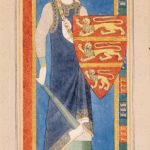