Henry VI (1421–71; reigned 1422–61 and 1470–1) was the son of Henry V and became king when he was just nine months old.  A weak and mentally unstable king he was deposed and captured by the Yorkists before being taken to the Tower of London where he was murdered.  In 1440 he had founded Eton College. Henry VI is depicted in this posthumous image against a red background, with five fictive shadows as if cast by the King’s head and by the frame.  A small, low brimmed hat sits squarely above his pale oval face. His hazel eyes are wide and innocent, the parting of his lips emphasised by later overpainting. Eyelashes and eyebrows are indicated by individual brush strokes. 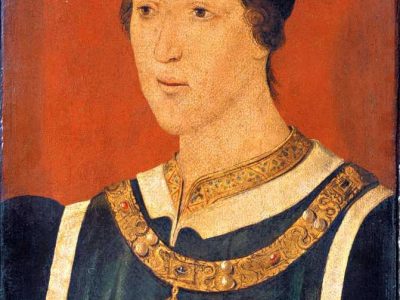