A studious man and keen collector, Hare was elected a member of the Society of Antiquaries in 1725 and Vice-President in 1727. One of several Freemasons to be members of the Society about this time, he became Grand Master of the Grand Lodge of England the following year. He bequeathed a substantial collection of prints relating to British topography and antiquities to the Society, which are now in the Society’s library. Coleraine is depicted half-length, turned to his left, facing forwards; traces remain of an earlier oval border. He wears a light crimson coat with silver buttons and a long white, dangling neckcloth. He has grey eyes and light brown hair. 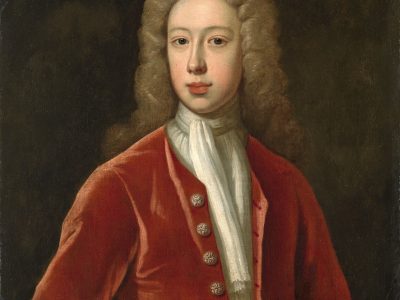