It was first discovered in 1778, and was said to have been found on the ‘Field of Bosworth’ – the famous site of the battle between Richard III and Henry VII that decided the Wars of the Roses.

An account of its discovery was published by the historian John Nichols in 1811, who described it as having been revealed during ploughing and that the decaying remains of a wooden pole, with traces of paint and gilding, had also been found.
The Bosworth Cross is a processional cross, which would have been mounted on a base for display or on a pole for carrying in a religious procession. It dates to the 15th century (before 1485) and has a strong association with the Yorkist dynasty, confirmed by the blazing sun motif that can be seen on the reverse of each of the roundels, which themselves display symbols of the four Evangelists. The sunburst motif was an emblem of the House of York and their supporters and represented the ‘sun in splendour’, which perhaps had connotations of a new dawn.

It was believed that the cross must have been carried by Richard’s supporters before being lost in the field of battle during the conflict at Bosworth. More recently there has been the suggestion that the cross had been retained as a Catholic relic by a family in Husband Bosworth, and that it does not have an association with the battle site. However, a number of objects have been recovered from the site, including silver-gilt badges bearing Richard’s symbol of the boar, coins, and the largest collection of round shots ever found on a medieval battlefield in Europe.

Type
object
Origin
The Bosworth Cross was presented to the Society in 1881.
Location
Burlington House 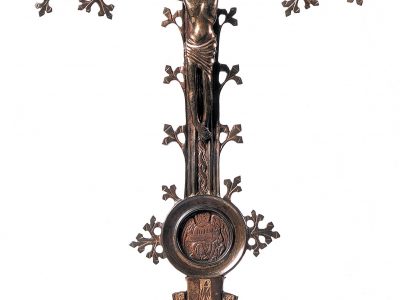 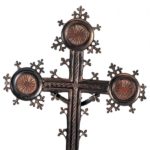