The Ballot Box is a useful object in explaining the process of membership: in 1751 George II granted a Royal Charter that permitted members to be called Fellows of the Society of Antiquaries (FSA). Proposals for membership can only come from existing Fellows and a candidate must have at least five nominations. The candidate’s name then qualifies to be included in the next available secret ballot. The voting process entails the Fellows inserting a hand into the circular opening of the box and dropping a cork ball into either side of the ‘yea’ or ‘no’ partition. The Society uses 25 such boxes at meetings today, however Fellows can also vote by post or online now. A successful candidate will have achieved a ratio of four ‘yea’ votes for every no or ‘blackball.’ Failure to be elected is known as being ‘blackballed.’ 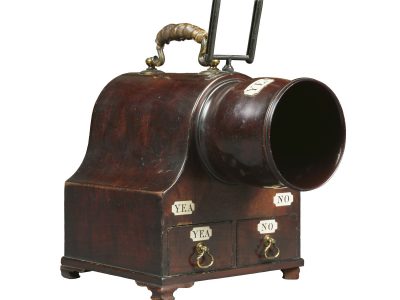