You are here:  Home / About us / Who we are / Our history / Burlington House

Since 1854, Burlington House has been home to five learned societies and the Royal Academy of Arts. Our continuing programme of public events and activities provides access to our exciting scientific and artistic output.

Burlington House is home to:

Burlington House was built in 1664 as a private mansion for Sir John Denham, a wealthy lawyer, poet and architect, who held the office of Surveyor General to the Crown. In 1668 he sold it to Richard Boyle, the first Earl of Burlington and second Earl of Cork, Lord Treasurer of Ireland, who gave the building its present name. Burlington House passed to the second and then third Earl and, during the third Earls’ lifetime, was the regular meeting place of all the leading wits, poets and scholars of the day.

Burlington House later passed to the Cavendish family and continued to nurture the arts and sciences, being home not only to Henry Cavendish who discovered hydrogen but also to the Elgin Marbles before they transferred to the British Museum.

In 1854, the government decided to purchase Burlington House and allocated it to the use of the learned societies and the Royal Academy of Arts who still occupy the building today.

The Society remained at its former home, Somerset House, until 1874. From 1856 onwards, however, the growth of the Government Civil Service, in particular of the Inland Revenue, led to increased pressure on space in Somerset House and a move for the Society became inevitable. Although the Society was reluctant to move, it was offered a suite of purpose-built apartments in Burlington House, Piccadilly, designed by architects Banks and Barry, which would give it significantly more room than was available in Somerset House.

The Society is housed in the West Wing alongside the Royal Astronomical Society and the Linnean Society. 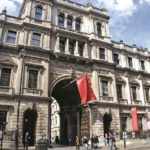 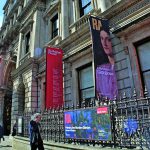 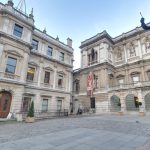 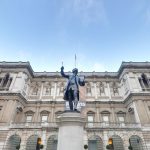 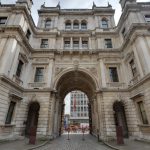 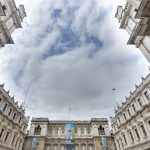 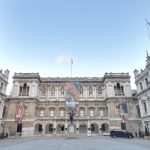 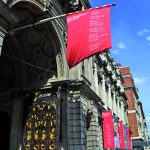