Founders of the Society wished to connect their Society to 1586 and the foundation of the College of Antiquaries. This earlier Society seems to have dealt with ‘antiquity’ rather than ‘antiquities’ and to have been more in the nature of a debating society. It had the aim of establishing a ‘cultural longevity’ for England. In 1614, however, ‘his Majesty (James I) took a little Mislike of our Society…yet hereupon we forebare to meet again…’

There are some indications of an informal society existing in the 17th century and at times the Royal Society (charter granted in 1662) displayed an interest in archaeology. It was not until the opening years of the 18th century that the Society of Antiquaries was founded (1707), or, as some Society documents have it, ‘refounded’ (1717).

The first minutes of the Society record that, on Friday, 5 December 1707, a meeting was held at the Bear Tavern in the Strand. The following January the Society agreed to meet in the Young Devil Tavern. The first President was Peter Le Neve, Norroy King of Arms, and it was agreed that the business of the Society should be the subject of antiquities, particularly as they related to the history of Great Britain. The period of study was that which pre-dated the reign of James I.

The Society encountered a few problems before it became firmly established, the bankruptcy of the owner of the Young Devil as well as matters of a more complex political, Jacobite nature. However, from 1717 the Society was established in the Mitre Tavern, Fleet Street, and there is a continuous series of minutes from then until the present day. The minute books of the Ordinary Meetings are still composed in manuscript.

In 1725 the Society moved to rented rooms in Gray’s Inn, followed by rooms in King’s Bench Walk and a return to the Mitre in 1729. Amongst the members was ‘honest Tom Martin of Palgrave’, whose ‘thirst after Antiquities was as great as his thirst after liquors’. In 1736 the Society was presented with an iron mace to be laid before the President at each meeting, a practice which continues today, using a silver mace. In 1751 the Society was granted a Royal Charter and took on its present form.

The role of the Society was, and continues to be defined as ‘the encouragement, advancement and furtherance of the study and knowledge of antiquities and history in this and other countries’. The basic structure of the governance of the Society, with the annual election of Officers and Council on St George’s Day (23 April) was also put in place at this time.

The Society left the Mitre Tavern in 1753 and moved into the former Robin’s Coffee House in Chancery Lane. In 1780 the Society again moved to new premises in Somerset House granted by George III . These rooms, which now form part of the Courtauld Institute Art Galleries, still have the intertwined SA monogram of the Society as part of the ceiling decorations.

The Society remained at Somerset House until 1874. From 1856 onwards, however, the growth of the Government Civil Service, in particular of the Inland Revenue, led to increased pressure on space in Somerset House and a move for the Society became inevitable. Although the Society was reluctant to move, it was offered a suite of purpose-built apartments in Burlington House, Piccadilly, designed by architects Banks and Barry, which would give it significantly more room than was available in Somerset House.

To learn more about what the Society does at Burlington House and how we continue to meet our core objectives of Fellowship, Conservation, Research and Dissemination today, please return to About Us or take a look at our News, Events and other areas of the website. 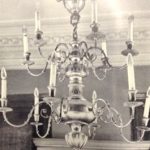 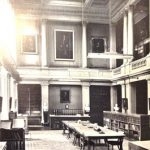 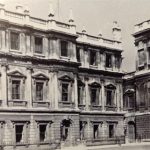