Seals and the People of Britain

All of our lectures are live streamed and are open to anyone to join us online, Fellows and Non-Fellows.

To view any of our past lectures please visit our YouTube channel.

Seals and the People of Britain 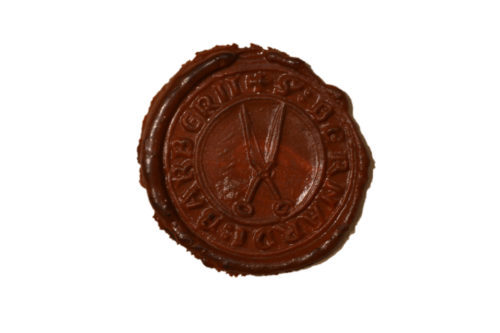 The study of sigillography, seals and seal matrices has attracted a growing interest in recent years. There have been conferences at the British Museum (2007 and 2015), Aberystwyth ( 2010) and Brussels (2015).

This conference of the Antiquaries will follow the June 2018 Imprint AHRC project workshop organised by Fellows Elizabeth New and Philippa Hoskin, and will precede the 2020 exhibitions and celebrations at Canterbury and Lincoln of the anniversaries of Thomas Becket and Robert Grossteste, which will both include sigillographic material.

There have been numerous finds of personal seals in the last fifteen years by metal detectorists which have been uploaded to the PAS website, as well as several projects to make the extensive archival and museum collections of seal matrices, impressions and casts more accessible, including those held by the Society. This has raised awareness of this rich material, but more needs to be done to help unlock  its potential.

This conference will explore the wide range of images and text displayed by seals and how this can be interpreted to reveal social identities, both  normal and exceptional, across medieval and early modern Britain. Different identities will be explored, including: urban and rural; learned and unlearned; craft and communal. It will also explore links with personal and family names, inherited symbols, and how far family relationships influence seals.

It will also highlight the value of the historic collection of seal impressions, casts and matrices of the Society (we have already secured the agreement the Society’s Librarian and Curator), and will invite interest in the possibility of setting up an organisation to study and publish seals and seal matrices in the UK.

14.00 Welcome by President of the Society of Antiquaries Paul Drury PSA

14.20: Elizabeth New FSA, Images and Identities – a survey of past work and present questions.

The past few decades have transformed our access to evidence about the seals and sealing practices of the people of medieval Britain, and this has in turn invited fresh questions about and approaches to the material and how it can further our understanding of society, economy, and culture in the Middle Ages. The integration of archaeological and archival material, digitisation, more standardised terminology, and the narrowing gap between so-called ‘professional’ and ‘popular’ history have all played their part in this, along with accessible resources such as the Portable Antiquities Scheme. It is an exciting time, but challenges remain, and additional questions keep emerging. This paper will consider the ‘sigillographic landscape’ as it currently stands and offer some thoughts on what the future might hold for the ways in which seals can continue to provide new impressions of the past.

Lost or discarded seal matrices as recorded by the Portable Antiquities Scheme (PAS) are naturally subject to different survival bias than impressions found on documents. Comparison of the frequency of different designs within these two groups can be revealing about the different statuses accorded to certain designs and legends. While such survival bias has been recognised, the quantity of data now available allows for more detailed analysis than ever before. We will discuss examples of seals at different points in their life cycle of production, use and discard. We will also start to quantify the extent to which generic seals of the late medieval period, including specific designs, are under-represented on surviving documents relative to their popular ownership (as revealed through the PAS dataset).

Women’s seals make up a surprisingly high proportion of the matrices recorded by the Portable Antiquities Scheme in England and Wales. This paper will offer a quick overview of the range on the PAS database, looking at craftsmanship, shapes and materials, the central motifs on the matrices, and the bynames. How are women described on their matrices? By relationship, occupation, place-name or nickname? Is this different for women on double-sided matrices? What trends can be seen in the data, and can these be related to the legal and social standings of women, and sealing, in the 13th and 14th centuries?

15.50: Alister Sutherland, Widows and their seals

Recent studies of medieval non-armorial seals have brought the seals and sealing practices of the ordinary man and woman of the British Isles to the forefront of attention. However, one group of seals that have hardly entered the discussion are those that were used by widows. By focusing on the legends and motifs of non-armorial seals used by widows in the rural communities of Saltfleetby (Lincolnshire) and Tanworth (Warwickshire), c. 1175-1349, this paper will explore how these women expressed themselves during widowhood and what this can tell us about their sense of identity.

This paper will analyze the use of heraldry by Scottish women in their seals dating from 1296 to c. 1460. It will offer an overview of seal design during the fourteenth and fifteenth centuries, taking into account the evolution of sealing practice amongst elite Scottish women during the period and how it compares to studies of seals elsewhere in medieval Britain. It will draw attention to ‘new’ seals belonging to Scottish women that were previously uncatalogued. The paper will show that the use of heraldry by Scottish women was not formulaic, rather, the placement of heraldry within the seal’s visual field articulated a specific meaning which was tied to the articulation of titles and familial relationships communicated in the charter.  Thus, the meaning behind seal design differed with the individual, sometimes promoting political links, reinforcing claims to land or social leadership, and sometimes commemorating personal links.

Scotland’s Treasure Trove laws are entirely distinct to the frameworks that govern chance finds in the rest of the UK, yet research access to stray finds data has, thus far, been limited. This paper introduces a project which is the first to incorporate such data in an assessment of national sealing practices in late medieval Scotland. It explores the results of the project so far, with a focus on non-elite seal matrices. It also considers this emerging picture in its British context, culminating in a case study focusing on depictions of St Katherine of Alexandria on Scottish seal matrices.

After a short introduction to the corpus of Irish medieval seals and seal matrices, this paper will discuss the range of personal seals in Irish collections. It will include seals both of Anglo-Norman and Irish owners; those of men and women, merchants and citizens. The range of devices used by identified owners and on anonymous seals will be described. Finally, the extent to which seals were used in medieval Ireland and how they differ from those of Britain will be discussed. Attention will be drawn to issues particular to seal matrices: the need to establish find circumstances as well as problems associated with the mobility of seal matrices both in the medieval and modern periods.

Playful aspects of the Monde Renversé — especially those involving the hare, including satires on gambling and hunting, and of popular festivity in the figure of the Boy Bishop

Along the way I will illustrate how undated matrices depicting popular motifs may be broadly dated from surviving impressions on dated documents, and consider the languages of the seal inscriptions, as well as some of the practicalities of reading them

John Cherry will draw the Zoom meeting to a close. He will try to assess what progress has been made in the two sessions in understanding the personal seals and identity of the people of Wales, Ireland, Scotland and England. He will note some of the difficulties that those interested in the subject face, and suggest ways in which the study may be moved forward.

Please note that due to COVID 19 restrictions this event will be online only.