Aylett Sammes, a maverick among the antiquaries of the seventeenth century, produced one of the most bizarre books of the age. Educated at Christ’s College, Cambridge, and associated with the Inner Temple, one of the Inns of Court, London, he turned to antiquarian studies, which he pursued seemingly in isolation. Sammes’ thesis was that Britain had been first settled by the Phoenicians, a proposition that had respectable antecedents. Yet, Sammes overplays his hand: he not only advocates for a flourishing Phoenician civilisation but even claims Phoenician as the original language of Britain, which he represents as a variant of Hebrew. Sammes’ wicker image is inspired by the classical concept that Druids carried out human sacrifice to save others from sickness or war – he believed that the giant statue was filled with live men and set on fire! 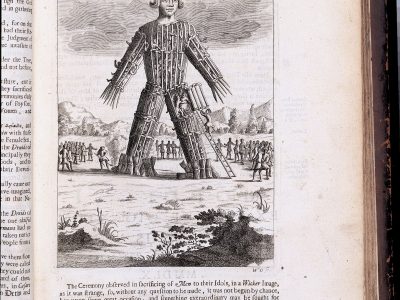