This is an insight into American history as well as an example of the eclectic nature of the objects within the Society’s collection, the narratives of which politically resonate to the present day. The Virginia Company was created in 1606 by Royal Charter to promote the settlement of Jamestown. In 1612 a campaign of lotteries was launched to raise money for a plantation. However, the administrators were accused of taking money from those who could not afford to gamble, and the licence was suspended. Interestingly, the pictures of Indians have been suggested to be taken from life and provide the earliest printed illustrations of Native Americans from what is now Virginia. Of the fifteen unique broadsides printed, the Society owns five. This example was presented to the Society by Thomas Hollis in 1757, although he was not then a Fellow. 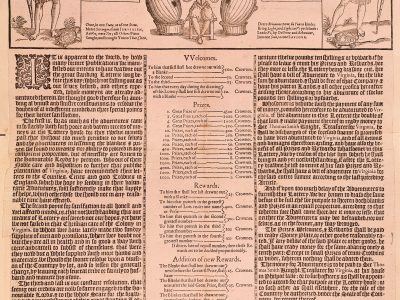