This is a portable nineteenth-century Russian triptych of the Virgin and Child, flanked by the standing figures of the Archangels Michael and Gabriel, set into a wooden travelling case. The Society’s triptych was probably produced by a painter employed by the ‘Old Believers’ – Russian schismatics who, rejecting changes proposed by the Patriarch in 1666-7, continued to commission icons executed in the traditional style venerated by the last tsar, Nicholas II. The central panel is a late version of the famous and much-copied Byzantine icon of the Vladimir Virgin, protector of the city of Moscow. The five seals on the exterior of the travelling case allow for various different interpretations to be made about the origin and journey of the work. 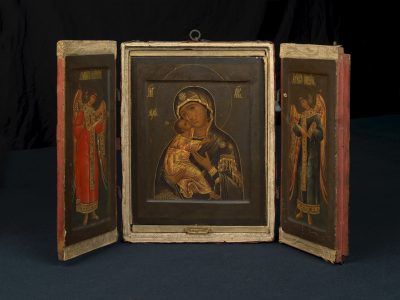 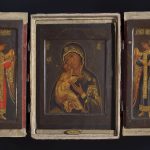