Three Nimbed Figures at a Table

Despite being the heavy damage down the centre of this work, much of the scene is still discernible: we can see three figures, two of whom are seated at a meal. However, contradicting interpretations of the subjects of this icon prevent its meaning from being confirmed. The enigmatic work was discovered by antiquary Edward Daniel Clarke in 1801 in the ruins of a church in the region of Nazareth and gave it to Thomas Kerrich. On the back of the painting was an inscription, now lost, which said the picture was discovered “in a vaulted stone chamber… under a heap of rubbish.” 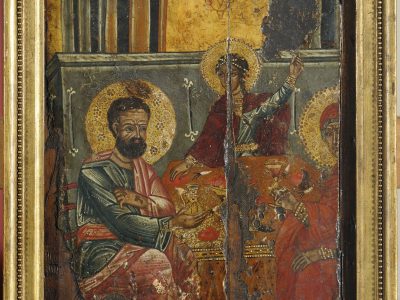