Having been brought over from St Petersburg several years prior, this panel was presented to the Society in 1852 by Frederick Ouvry FSA in the name of the Hon. John Kennedy. This Resurrection icon exemplifies a type of panel produced in the first half of the nineteenth century at Palekh. Located between Moscow and Novogod, it was the largest and most successful of the centres where painters working for the ‘Old Believers’, who broke away from the Russian Orthodox Church in 1666-7, continued with their traditions of icon painting. Flourishing until the beginning of the Soviet era of 1917-89, they are known for their intricate designs and jewel-like palette. 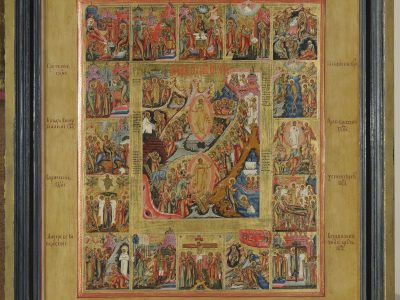