This stone head with coronet was found on the site of Merton Priory, Surrey, in 1797. The diplomat and collector Sir William Hamilton FSA presented the head on behalf of the Priory’s landowner to the Society in 1802. The head would have originally been painted, and the coronet or chaplet around the head, gilded, with traces of the latter still visible. It appears to be of the earlier part of the fifteenth century with the arrangement of the hair, cropped round over the ears, resembling the fashion of the reign of Henry V.
The Society was one of the few national organisations interested in the study and collecting of British antiquities in the early nineteenth century, and thus came to be seen as the most suitable place for the safe deposit and display of new discoveries of portable antiquities. Whilst the Society had the capacity of wall space to display a number of paintings, larger artefacts were often given away due to space limitations at the Society’s apartments. The smaller pieces remained and were added to, which led to an ever-present eclectic variety of objects available for Fellows to view, handle and study, with the Merton Head being a prime example of such.

The Merton Head is now on long-term loan to the British Museum and is available to view in their Enlightenment Gallery (G1/DC5). 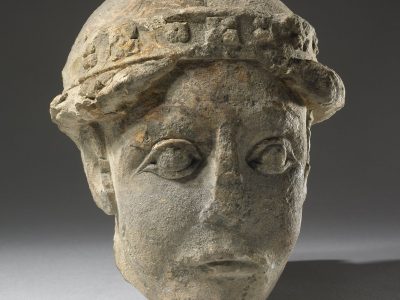