The Encampment of the British Forces near Portsmouth, 1545

This engraving is the sole record of the events of the 19th July 1545, when 200 French ships crossed the English Channel to attack the English fleet. Although a victory for the outnumbered English ships, the event marked the loss of one of King Henry VIII’s largest vessels, the Mary Rose. The original image appeared in the form of a wall painting at Cowdray House in Sussex, the home of Sir Anthony Browne, Master of Horse for King Henry VIII. The Sherwin brothers, who specialised in historic engravings, were commissioned by the Society to take a record of this wall painting. It was copied in watercolour in 1775 and, to much opposition due to cost of publishing such a large sized print, the Society published the picture in 1778: two copperplates were needed to accommodate the six-foot-wide engraving.

A large scale colour copy of the scene can be seen at the Mary Rose Museum in Portsmouth.

See Coronation Procession of Edward VI for another copy of a Cowdray House wall painting.
See Le Champ de Drap d’Or (The Field of the Cloth of Gold) for another engraving by Basire. 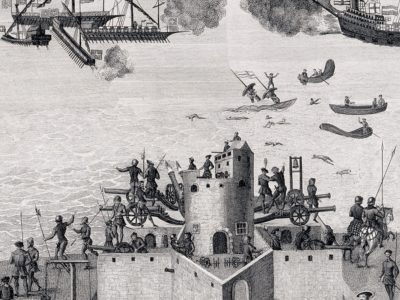 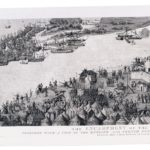 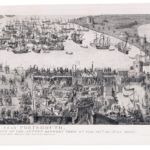 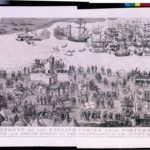