The Embarkation of Henry VIII at Dover

This is an eighteenth-century watercolour copy of the Tudor painting ‘The Embarkation of Henry VIII at Dover’, depicting King Henry setting sail for his celebrated meeting with the French monarch Francis I at the Field of Cloth of Gold in 1520.

Commissioned by Henry VIII and now in the Royal Collection, the original painting was designed to capture the power of the royal navy and the magnificence of the English court.  The Society’s 1779 version was painted by the Swiss watercolourist Samuel Hieronymus Grimm, who also copied other Tudor paintings for the Antiquaries.

In 1781 Grimm’s painting was engraved by James Basire as one of a series of Historical Prints including ‘The Field of Cloth of Gold’ (also in the Royal Collection) and five paintings from Cowdray House.  The scale of the subject led the Society to commission a new size of paper, the ‘antiquarian’, measuring 31 by 53 inches.

Grimm’s painting and Basire’s engravings were made at a time when an imperial and domestic crisis was prompting a movement to commemorate remarkable events in British history.  It was hoped that the publication of such large-scale impressive prints would encourage a sense of patriotism and national identity, whilst also complementing the vogue for history painting within the Royal Academy.

See also [The Field of Cloth of Gold ] for a companion piece.
For other work by S. H. Grimm, see [Coronation Procession of Edward VI] 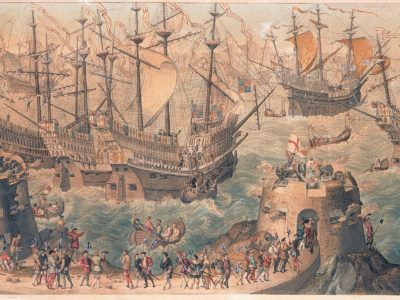