Whilst this is print is amongst the earliest images of a Society meeting, it is not as objectively accurate as expected and is, in fact, highly satirical. Produced by one of the most original, productive, and skilful caricaturists of the period, Cruikshank captures the hostile reception of a newly elected president of the Society, then-future Prime Minister Lord Aberdeen. Presenting to a table of aloof members, one of whom is asleep and another inspecting the bust representing his mistress, Lord Aberdeen is shown holding a scroll inscribed as on a monument ‘K.I.S.S.M.Y.R.’ The table is strewn with everyday objects such as pickled cabbage and a chamber pot. Produced for the radical monthly magazine The Scourge, this print shows both the potentially controversial history of the Society as well as acting as a useful illustration of the first rooms used by the Society in Somerset House. 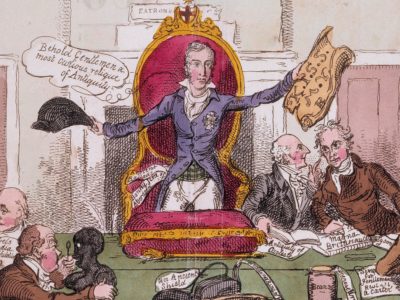 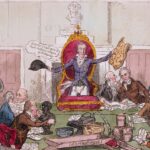