‘Surrey’ from The Theatre of the Empire of Great Britain

The map of Surrey shows the lost royal palaces of Richmond and Nonsuch. These images are among the most important contemporary records of these important buildings, which no longer exist. John Speed was a tailor turned antiquary, who, in the small and cliquish world of Jacobean London, managed to join part of the circle around William Camden. He became a historian and cartographer. These maps are notable for their flamboyance, and for the important plans of the chief towns – the first such collection to appear in print. 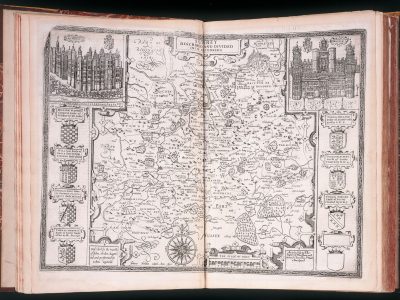