The illustrations on each panel of the casket narrate the story of St Thomas Becket, Archbishop of Canterbury. Somewhat a figure of controversy, he had been in an ongoing conflict with Henry II after changing his allegiance from the Crown to the Pope and the Church. Allegedly, four knights overheard the King’s shouts of frustration about the Archbishop and took them as orders to murder him in Canterbury Cathedral. This dramatic martyrdom was supposedly followed by a series of miracles and Becket was canonised within three years of his death. The casket was purchased in Naples by the then-British Ambassador Sir William Hamilton FSA, who presented it to the Society in 1801. 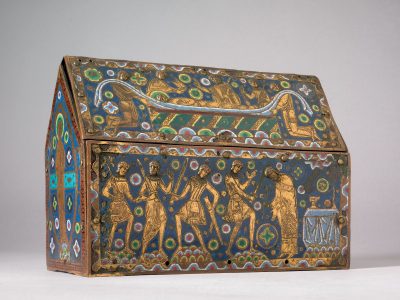