This painting was received by the Society from the bequest of Prince Hoare FSA. Son of the artist William Hoare RA, Prince Hoare was elected a Fellow of the Society of Antiquaries in June 1815. This painting depicts an episode from the legend of St Agatha, a Christian martyr. According to legend, Agatha, a devout Christian virgin from a wealthy noble family in Catania, would not submit to the demand of the Roman consul Quintianus to offer sacrifices to pagan idols. She was imprisoned, and after refusing to deny Christ, tortured. Here, we can see her barefoot, bare breasted and with bound hands, being led by two guards out of a building through a crowd of gesticulating onlookers. 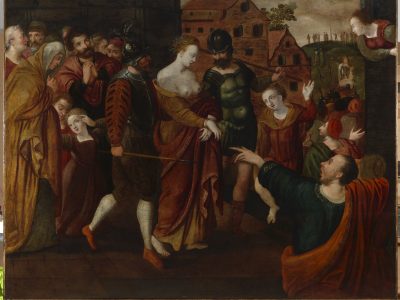 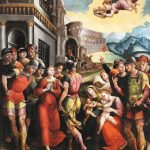