Etheldreda (Aethelthryth (OE), later Audrey), foundress and abbess of Ely, was the most important native female saint of medieval England. The panels depict her life, and it is very likely that they once belonged to Ely cathedral, given that Etheldreda is the cathedral’s patronal saint. The panels are attributed to Robert Pygott who is known to have worked on the new canopy for the shrine to Etheldreda at Ely Cathedral in 1455. An inscription consisting of four couplets, painted in black letters on a white ground, one beneath each of the scenes, the two on the left-hand panel half erased, no textual source accounting for all eight lines has come to light. 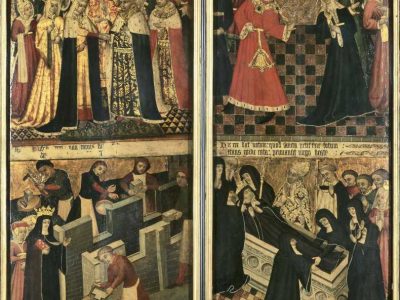