This large globular shaped Roman amphora is known in archaeological terms as a ‘Dressel 20’. A Dressel 20 vessel is a very large, rounded vessel with two handles and a thick, rounded, or angular rim. Manufactured in Spain from the later 1st century AD until the 3rd century AD, Dressel 20’s were transport vessels used to export large quantities of olive oil throughout the Roman Empire. This type of vessel would contain between 40-80 litres of olive oil.

Due to their size and the porous nature of the composition used to make these vessels, they could only be used once and would be disposed of once empty. Because of this, vast quantities of Dressel 20 fragments have been found throughout the Roman Empire, with the Monte Testaccio site in Rome (a large mound to the South of the city that turned out to be the site of a Roman rubbish dump) containing fragments of around 53 million amphora, many of which were of the Dressel 20 type. Many fragmented containers of this kind have been found in Britain also. 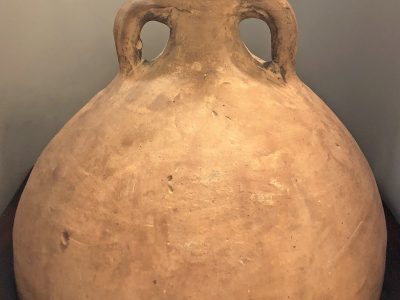 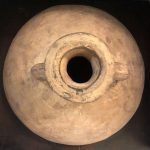 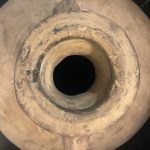 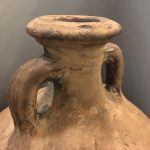 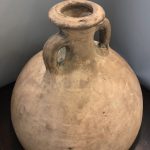