Poly-Olbion is in some ways a versification of William Camden’s Britannia. Its subtitle reads ‘a Chorographicall Description of Tracts, Rivers, Mountains, Forests… of Great Britain’. In Poly-Olbion, Drayton celebrated the beauties of the land of Albion and the historical legendary scenes enacted there. Like Camden, he followed the course of rivers of each county, and among the pleasures of his book are the illustrations by William Hole showing river nymphs disporting themselves in a variety of engaging poses on the county maps. 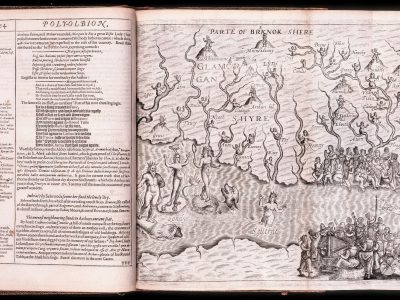