This painting of Richard III (1452–85; reigned 1483–5) is probably the earliest surviving version of a lost prototype made in his lifetime. It is the companion to the arch-topped painting of Richard’s brother, Edward IV, painted on boards from the same tree. The two portraits were no doubt intended for display as a pair, hence the similarity of their fur-lined cloth-of-gold gowns, delicately drawn hands and sensitively described features. The inscription reads “Richard’ Rex terti’” on the bevelled lower edge of the frame, in black gothic painted script. This was reinstated after 2007, after the removal of overpainting, with the aid of UV photography and Thomas Kerrrich’s drawing of the portrait. 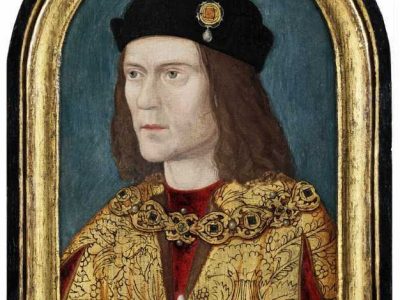