This register contains the signatures of all those admitted to the Society between 1752 and 2001. Once having signed it, elected members had confirmed their obligation to promote the honour and interest of the Society, and were entitled to call themselves Fellows. Illustrated here is one of two pages displaying the signatures of Patrons and Royal Fellows; George IIII, George IV, William IV, Prince Albert, Albert Edwards, and George, Duke of York. James Basire, the Society’s engraver from 1759-1802, drew the ornamental frame. Here, we can see the Society’s arms displaying the cross of St George with the royal crown in the upper centre, as well as the Society’s lamp emblem, its motto, arms, charter and seal at the lower part of the frame. 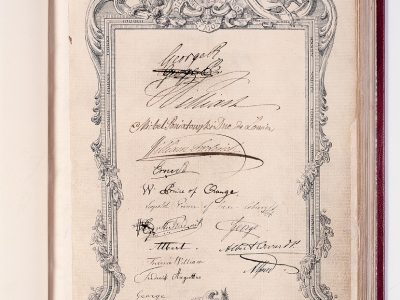