This allegorical painting shows some of the leading figures of the Protestant Reformation of the sixteenth Century in an imaginary gathering. Grouped around a table n front of a burning candle, the men are metaphorically confronted with the forces of Roman Catholicism, caricatured as four figures at the bottom of the scene.

Artist / Maker
Unknown English or Netherlandish artist, probably working in London
Type
painting
Date
Around 1660
Origin
Discovered in about 1950 in a cupboard in the Society’s rooms by John Hopkins, then Assistant Librarian. Initially mistaken for a roll of linoleum but was subsequently cleaned and framed. No previous record of it has come to light and there were many clerics among the nineteenth-century Fellowship who might have presented it.
Material
Oil on canvas
Dimensions
95.3 x 177.8cm
Location
Burlington House 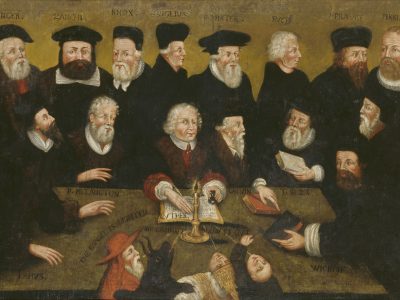