The Presidential Mace, also known as ‘the new mace’, was presented to the Society in 1912 by Colonel Croft Lyons FSA. The mace is of solid silver with the Society’s arms inlaid in enamel at the head of the mace. Around the bottom, engraved into the surface, are the names of the Society’s Officers, active at the time of donation.

The ceremonial mace is a symbol of authority, with this symbolic value deriving from the original purpose for which maces were designed – to be used as weapons in combat and warfare.
The use of a ceremonial mace at Society proceedings was first introduced in 1736. The first mace to be used was a 16th century military mace of gilded iron which had belonged to the Society’s first President Peter le Neve (1661–1724) and was presented by George Vertue (1717-1756), the Society’s engraver.

Over time the old mace became worn and shabby with use, with the gilding all but gone, and in 1819 the decision was taken that the Society should commission a more suitable implement for its formal proceedings. A newer replica mace was commissioned, being almost an exact replica of the old mace for which it was a replacement. Eventually, this replica mace was replaced when the new Presidential mace was gifted. The replica mace is still used for out of London Ordinary Meetings and the old mace sits within the museum collections. 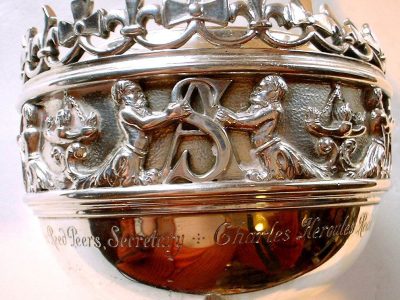 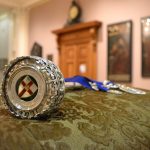