Meeting at the Society of Antiquaries at Somerset House

This print illustrates the pivotal moment in the history of the Society when it established its status as a respected learned body. Since the Royal Charter was obtained in 1751 the Society was exponentially growing in activity and earnest to preserve the nation’s heritage. The long-felt need for permanent affordable accommodation was becoming paramount. When the government announced plans in 1755 to pull down old Somerset House and erect public offices housing the Royal Academy and the Royal Society, the members of the Society of Antiquaries saw their opportunity to petition for a space amongst them. This also allowed for cross-Societal meetings and activities. This move also brought with it an expansion of membership (and thus a greater pool of funding): by 1807 there were 849 Fellows (nearly 300 more than the Royal Society). 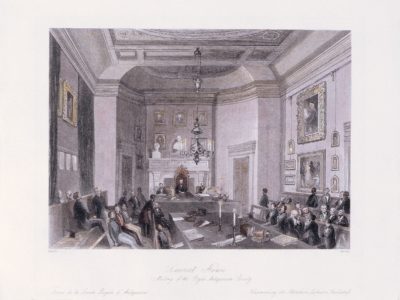