This is the first major portrait of Mary (1516–58; reigned 1553–58) after her coronation on 1 October 1553 and was probably painted around the time of her thirty-eighth birthday (18 February 1554). Mary, the daughter of Henry VIII and Catherine of Aragon, succeeded to the throne on the death of Edward VI. The portrait presents her as a woman who has, through a sad and lonely youth, honed an iron determination and a sense of destiny. It pre-dates the very different image of the Queen devised by the Netherlandish artist Anthonis Mor [see Mor’s portrait of Jan van Scorel]. Mary stands in the pose established by Holbein for demure women. Behind her is a red velvet Cloth of Estate. The jewels she wears all carried special historic interest: the Tau or ‘headless’ Cross, set with five diamonds and a pearl pendant, was her mother’s; the table diamond with a pearl pendant was given to her by Philip II of Spain who she married in July 1554 ; the pendant hanging from her waist is symbolic of her Catholic faith. 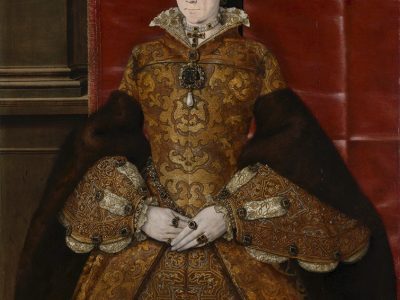