Louis succeeded Charles VIII as King of France in 1498 and married Charles’s widow, the former Queen Consort, Anne de Bretagne. After her death in 1514 Louis married Henry VIII’s sister, Mary Tudor. Louis died in 1515 and was succeeded by his cousin, François of Angoulême, the subject of the Society’s portrait of François I, King of France. The Society’s portrait of Louis XII, is closely related to the finer painting in the Royal Collection, and is either a version of it or is based on the same prototype. This is clear notwithstanding the small but significant differences between the two. They are both similar in size, although the painting in the Royal Collection is rectangular rather than arch-topped. The superior quality of the Royal Collection painting can be seen in the draughtsmanship, especially of the facial features, these cohere to form a convincing and undoubtedly recognisable portrait. In the Society’s painting, by contrast, Louis’ eyes, nose and mouth seem to float unanchored from his face. 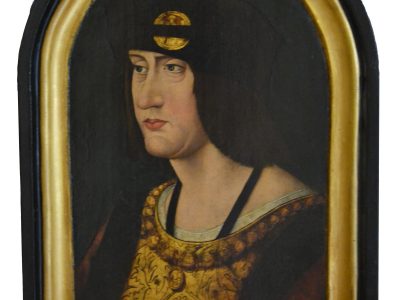