Fragments (26 leaves) of a 10th century Gregorian sacramentary, removed between 1773-1790 from the original binding of MS 154, where they formed the packing of the boards. Conserved and rebound in 1997. Some folios include an early form of music notation, typical of the period: cheironomic (staff-less), adiastematic (unheightened) neumes. Music notation in the 10th century was relatively rudimentary, and various forms coexisted both in theory and in practice. Both scholars and practicing musicians explored several systems for writing music during the early Middle Ages, with the adoption of the 4-line staff becoming widespread in the 11th century. As notation became more sophisticated, manuscripts with imprecise forms of notation such as those in MS 154* quickly became obsolete, and now often survive only through their subsequent reuse in bindings of other manuscripts. 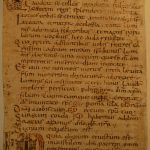