The occasion of the meeting between Henry VIII and the French king, François I, near Calais in June 1520 was depicted in two immense paintings, probably executed from 1550 to 1580 and now in the Royal Collection at Hampton Court. One shows Henry VIII departing from Dover and the other the festivities that took place – known as Le Champ de Drap d’Or. In 1770 Sir Joseph Ayloffe gave an account of the latter to the Society, and it was agreed it should be copied and published as a print. The drawing, although reduced, contained so much detail that innovative techniques were employed to fit the image on one sheet. Basire made the largest single copperplate used up to then and the papermaker, James Whatman, invented special equipment to manufacture the largest sheet of handmade paper, known afterwards as ‘Antiquarian’ size (31 x 53 in.; 78.7 x 134.6 cm).

See MS 136/2 Jousting cheque for a heraldic manuscript relating to The Field of the Cloth of Gold.

See The Encampment of the British Forces near Portsmouth, 1545 for another engraving by Basire. 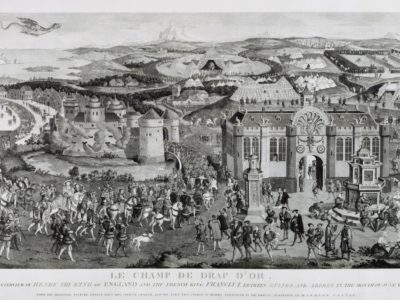 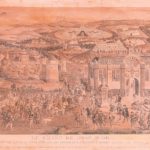