One may already recognise depictions of this lamp across the Society’s publications as well as within the brass on the floor of the entrance hall at Burlington House. This lamp was adopted by the Society as its emblem in 1770. Drawing from an analogy between the lamp and the belief in knowledge and discovery at the heart of the Society’s activities, the depictions of the lamp are often accompanied by the Latin inscription ‘non extinguetur’, which translates as ‘shall not be extinguished.’ The object was presented to the Society in 1736 by Sir Hans Sloane, a well-known physician and collector, whose later endowment to the nation helped to form the basis of the British Museum.

At first the lamp was presumed to be Roman; it was found at St Leonard’s Hill, Windsor, in 1717 together with other Roman remains. However, it is now know to be medieval and recent research suggests it may be Jewish. Originally designed to be suspended, the lamp would have had a drip-pan hanging below the burners to collect leaking oil. 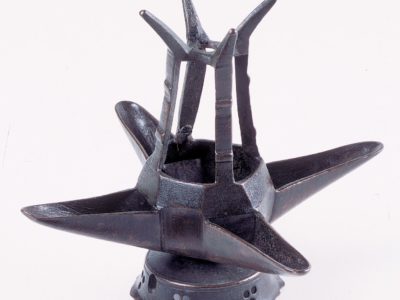