A jousting cheque is a document on which a herald noted the scores achieved by knights competing in mounted lance combats. A series of contests constituted the principal entertainment during the meeting of Henry VIII and François I, King of France, at the Field of the Cloth of Gold in 1520. Displayed are the arms of François and Henry, with the collars of the Orders of St Michael and the Garter respectively, followed by emblazoned shields of French and English nobility. However, squeezed in between the royal arms are the scores for nine pairs of knights, each of whom ran eight courses. Thus, this cheque is a hybrid document, the beginnings of an armorial roll combined with the scores of the jousting competition. 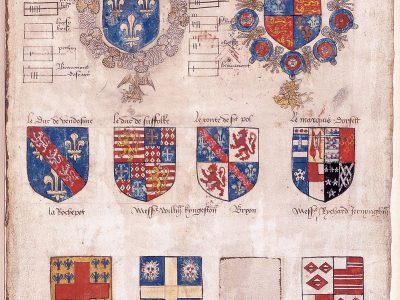