Among the finest panels in the Society’s collection, Mor’s portrait of Scorel is one of only three likenesses of the Utrecht artist, poet, musician, clergyman and antiquary in existence; it is a picture of one highly successful sixteenth-century north Netherlandish artist by another. It was once part of a funerary monument in the Mariakerk in Utrecht before it was removed in 1592 and the monument itself dismantled in the late 18th century. Jan van Scorel was the first northern Netherlandish artist to absorb High Renaissance art in Italy and his return from Italy to Utrecht in 1524 has been called a turning point in northern Netherlandish painting.

Anthonis Mor became a portrait painter much in demand in the courts of Europe. In 1554 Mor came to England to paint Mary I, the same year that the queen sat to Hans Eworth for the portrait now in the Society’s collection. 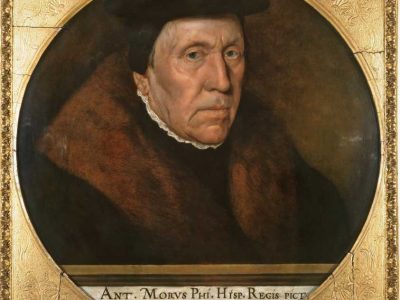