Isabella of Bourbon (1436-65) (previously identified as ‘Margaret of York’)

According to the inscription on the frame, this is a painting of Margaret of York (1446–1503), sister of Edward IV and Richard III. She was married to Charles the Bold in 1468 in a skilful dynastic manoeuvre aimed at cementing Anglo-Burgundian relations.

The sitter’s gaze is directed slightly upwards, her dark and rather prominent eyes contrasting with the pallor of her long face. The loops of the tall henin headdress rest on her high forehead. The tight fitting cap of the henin exposes her left ear, strikingly large and pink. A finely painted veil falls in elaborate shimmering folds at her back and across her right shoulder. She wears a red gown, its square neckline edged with brown, framing a gilded collar studded with pearls in vertical rows of twos and threes. Suspended from her shoulders is a square-link chain, which appears to be supporting a large, black, faceted gem in an ornate mount. Above this is a curious, gilded, flame-like jewel. 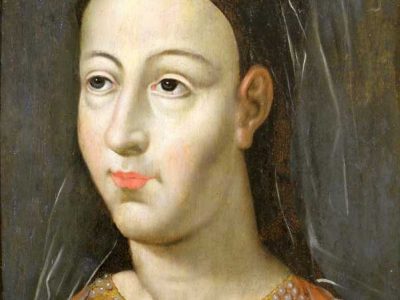