Humfrey Wanley FSA (1672-1726) was one of the three founding members of the Society of Antiquaries, taking the first minutes in 1707. From about 1708 until his death he was librarian and secretary to Robert Harley, 1st earl of Oxford, and his son Edward, 2nd earl. He played a prominent role in the formation of the Harleian Library, which contained one of the finest manuscript collections ever assembled. The painting shows the magnificent cruciform page from St Matthew’s Gospel, which Edward Harley bought and is one of the greatest of the Harleian treasures, now in the British Library. Wanley is depicted standing behind a lectern, wearing a slate coloured velvet coat with yellow frogging, brown cuffs and a black cap with a gilt tassel. He has a pale clean-shaven face and dark eyes. 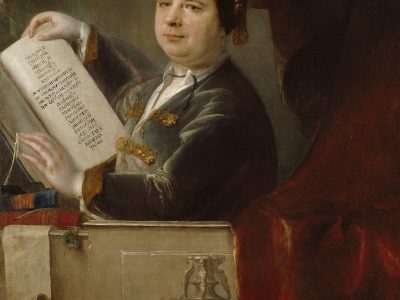