Thomas Kerrich bequeathed two paintings of Henry VIII (1491–1547, reigned 1509–47) to the Society, both based on a portrait type pre-dating Holbein’s more famous image of the king (the second portrait is in the Council Room). This picture, the larger and earlier of the two, may have been produced within Henry’s lifetime, though not from a live sitting. It is a rare example of a portrait on a panel of oak from a tree grown in England, rather than on a board imported from the eastern Baltic. The King’s appearance is almost informal in this painting. 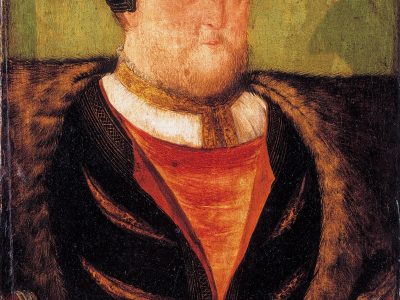