This is the later of the Society’s two portraits of Henry, showing him in his last years. Kerrich recorded that he acquired this picture, which he identified as a portrait of Henry VIII, together with another, which he thought was by the same artist and might depict ‘his queen’ (possibly ‘Jane Seymour’), in 1781. Both of the Society’s paintings show the King in a comparable costume, consisting of a doublet which, though fur lined here, is similar to the other in having an embroidered border and the same diagonal slashing revealing tufts of dark brocade. 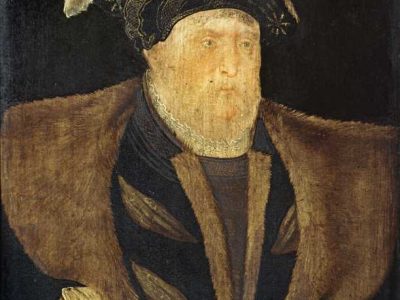