The society has four versions of portraits of Henry VII who reigned between 1485-1509, two of which were bequeathed by Thomas Kerrich. This picture was given to Kerrich by the Revd Robert Masters, who had owned it since at least 1762. Henry VII, the first monarch of the Tudor dynasty, was the only child of Lady Margaret Beaufort and Edmund Tudor. Genealogically his claim to the throne was tenuous as he descended from John of Gaunt’s third marriage to Catherine Swynford, which has taken place after the birth of their children. Henry VII is seen bust-length, with head and gaze turned towards his left in a version of a much replicated portrait image, which here shows him with markedly paler grey hair, but otherwise standard details, such as the black hat. 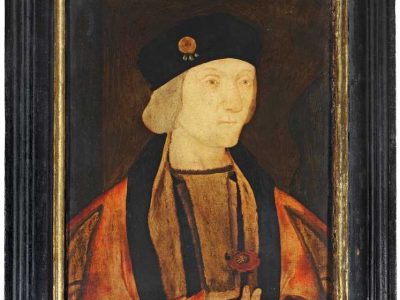