Henry VII, the first monarch of the Tudor dynasty, reigned from 1485–1509. His claim to the throne was tenuous: his mother Lady Margaret Beaufort was descended from John of Gaunt, a son of Edward III and ancestor of the House of Lancaster, and his father Edmund Tudor claimed descent from Welsh princes. Henry VII is depicted half-length, his head casting a shadow against the olive-green background, his face and gaze depicted to his left, probably towards a companion portrait. Above him is a gilded fictive lobed arch with trefoil terminals to the cusps, creating an impression of three-dimensional solidity. 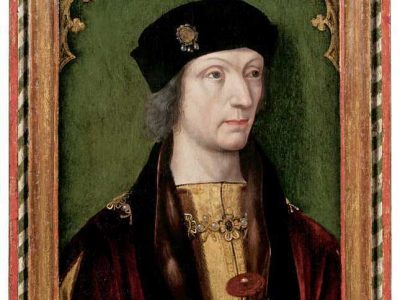