The Avebury henge complex is one of the most impressive in Britain. Stukeley first visited the site in 1719, his interest aroused by reading John Aubrey’s suggestion that the Ancient Britons were responsible for building the stone circles. Stukeley was also concerned about the site’s destruction by local landowners, who saw the stones as merely a source of building material. He used a theodolite, a measuring instrument fitted with a telescope that is used to determine the level of the land, and the latest survey techniques to draw an exact geometrical representation of the layout and orientation of the monuments. This allowed him to calculate the original number of stones. Combining his results with previous research, he was able to show where standing stones had been removed in previous decades, as well as providing dates of those losses. 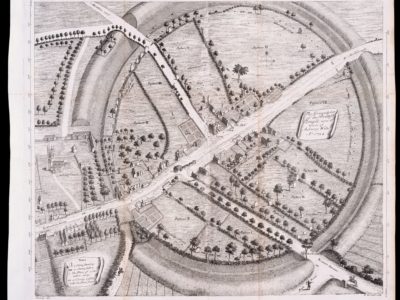