George Vertue FSA (1684–1756) was one of the leading engravers in the first half of the eighteenth century. He was a member of the Society from 1717 and the Society’s official engraver until his death in 1756. Most of the illustrations in Vetusta Monumenta, up to his death, are done by him. His notebooks on British art of the first half of the 18th century are a valuable source for the period. Vertue is depicted half length, seated to his left, in informal clothes, wearing a drab coat, white shirt and neckcloth, and reddish-brown velvet hat. 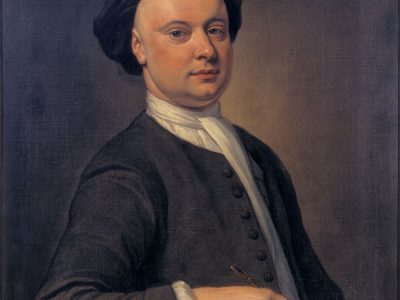