François d’Angoulême (1494–1547) became King of France (1515–47) on the death of his cousin, Louse XII. This portrait was probably painted in François’s lifetime, c 1515–19, based on a portrait type created while he was still beardless. He is depicted against a green damask background, the pattern of which is just discernible behind him on the right. Beneath a red, fur trimmed gown, he wears heavy cloth of gold tunic, deeply slashed at the chest and encrusted with gems along the neckline. The rather flat, linear execution of the motif on the King’s gown could indicate this painting could be a copy, rather than a primary image 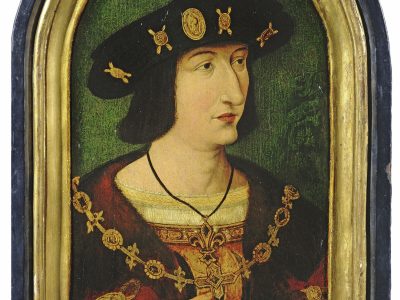