Ferdinand was the King of Sicily from 1468 and King of Aragon from 1479, and as a consequence of his marriage to Isabelle I was King of Castille. In the hope of securing the support of England against France, Ferdinand and Isabella agreed to the marriage of their youngest daughter, Catherine of Aragon, to Prince Arthur, heir to the English throne. On the untimely death of Arthur at the age of 15 Catherine was married to his Brother Henry, later to become Henry VIII. Ferdinand is depicted dressed in a fine cloth of gold gown with an upright neckband, against a red background. His distinctive, pale oblong face seems slightly characterless.

In our meeting room is this portrait of King Ferdinand of Aragon, born #OTD in 1452. In order to secure the support of England, he agreed to the marriage of his daughter Catherine to Prince Arthur. On the untimely death of Arthur, Catherine married his brother Henry, later known as King Henry VIII. 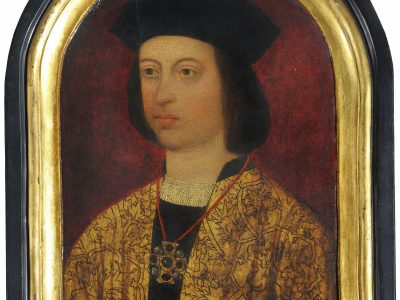