The clock is a unique example of a Falling Ball Clock. It is a terrestrial globe made of silver gilt with geographical outlines based on world maps and is driven by its own weight. It is an elaborate and highly interesting timepiece, and although there are several examples of this type of clock in the collections of the British Museum, none are of this size or complexity. The clock is usually displayed within a 19th-century mahogany four-pillar stand with mirrored based to show the lower dial engraved ‘Vulliamy’. The clock runs for approximately two days and is rewound by lifting the globe.

Benjamin Lewis Vulliamy (1780–1854) donated the clock to the Society in June 1850. He was known for ingenious alterations of historic clocks and had carried out modifications to the Society’s clock prior to its donation, which included replacing the missing top and bottom portions of the globe with plain metal featuring no engraving, along with a new dial and hand. The Vulliamy family of clockmakers were highly important makers and are considered amongst the leading manufacturers and innovators in horology.
The clock underwent conservation in 2019 and is now on display in the Library. 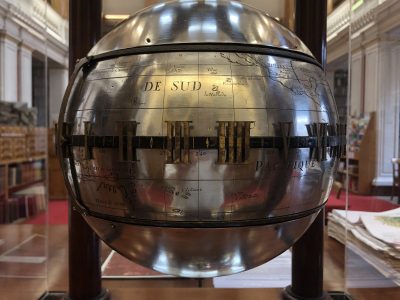 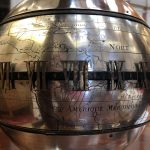 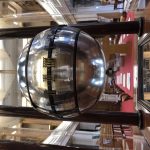 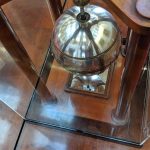